Ninety-nine films, four per day, one month on your butt and no end in sight…

Film festivals are fun. Invigorating. Inspiring. But it has to be said, they are also hazardous to your health – especially if you’re a film critic covering one of the biggest in the world.

Marathon swathes of time are spent away from sunlight. You spend so much time sitting in the dark you worry about turning into a vampire and getting deep vein thrombosis. Kind of insane when you think about it…

I was comprehensively reminded at the recent 2017 Berlinale, the above being the ‘statistical’ outcome from my own ’embedded’ experience there. I covered the festival for three Australian media outlets: ABC Local Radio (Overnights with Rod Quinn: 3 x sprawling chats and tons of fun); ABC Radio National (film program ‘The Final Cut‘ with Jason Di Rosso. Great to ‘talk festivals’ with possibly the last remaining cinephile on Australian radio); and Guardian Australia (a feature about compassionate, Australian-made game changer, Casting JonBenét.)

True, I got to see a gigantic, excellent swag of films (Competition selection aside, the Berlinale programmers excelled themselves in Panorama, Generation, Forum, Retrospective and Shorts). And, after a “hiatus”, to re-inhabit one of the great passions of my life: cinema.

But that wasn’t the best bit. I also got to meet some lovely folk. Lovely film critic folk.

They became my community.

It’s been a while ‘between drinks’ for me at Berlinale: twelve years to be precise. (Eleven really – last year I dipped a toe back in, covering genre-blending Aboriginal TV series ‘Cleverman’ for Guardian Australia. Directed by Wayne Blair, it world premiered in ‘Berlinale Special Series’.)

The first time I hit the ground running at Potsdamer Platz – sampling my first curry wurst in sub-zero icy climes – was in 2005.

I was a critic and presenter for Australian TV program, ‘The Movie Show’. I got lucky: it was the year The Life Aquatic with Steve Zissou was in Competition – a dream come true to interview not only Wes Anderson but Angelica Huston *swoon*. (She had a cold and I told her about echinacea).

Ken Loach was there with film ‘compendium’ Tickets. (We chatted atop the not-long-completed, highly contentious Renzo Piano glass triangle, “Potsdamer Platz 11“.) I interviewed George Michael (vale) at the Adlon Hotel about documentary George Michael: A Different Story. (He was super lovely. We talked about the “difficulties of being Cancerian”.) Plus it was the season of mighty films Paradise Now, Thumbsucker, Sophie Scholl and The Beat That My Heart Skipped, blitzing at the festival awards all.

Both starting out in their careers, we met for the first time in Berlin.  I remember standing in the middle of the (then) AFC Festival party, the three of us a bit dazed and confused from jet lag and the crazy energy of the night. Desert-hued snowflakes sprinkled down outside the window, tinged by the Festspiele‘s orange lights shining on from the platz below. It was a bit special.

It was a bit special again when I interviewed Wayne at Berlinale 2016, now years on with a smash hit under his belt (The Sapphires), not to mention an LA agent. Grinning back at me, he thought so too.

To paraphrase an old Deutsch theologian, nothing like “the magic of beginnings”… 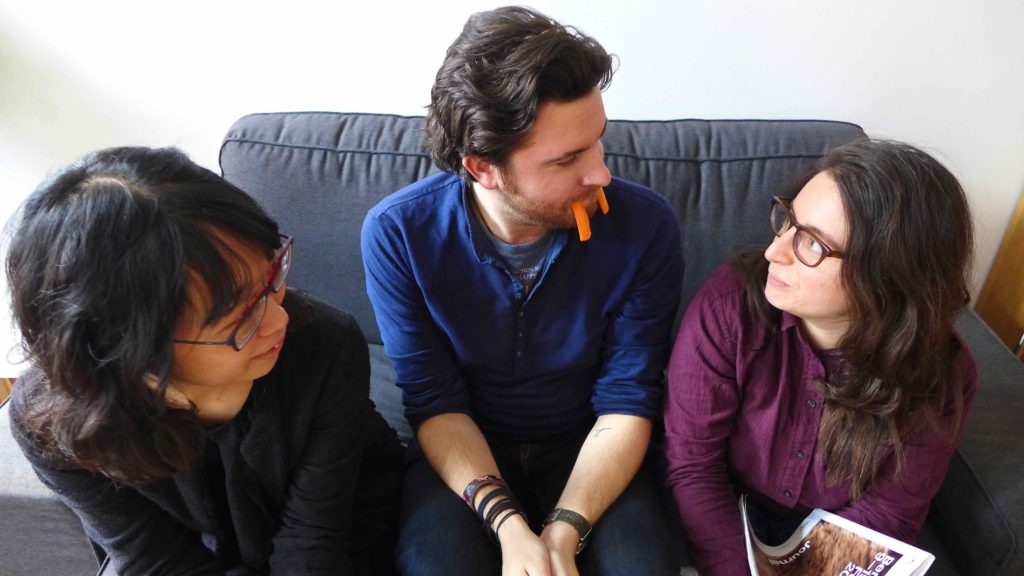 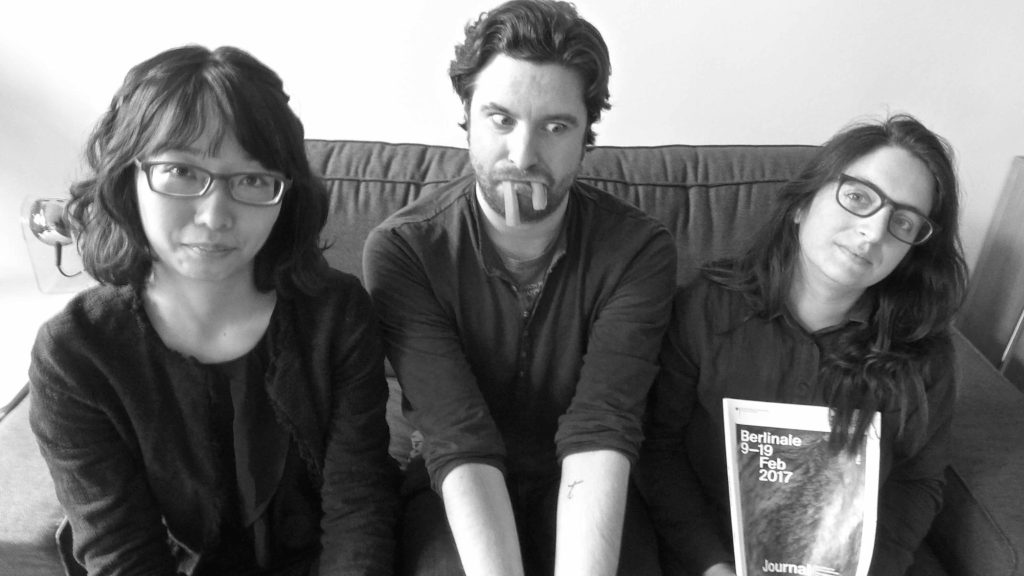 Too many hours in the dark.. L-R: Yun-hua Chen, David Mouriquand & Teresa Vena.

2017 rolls around. I’m living in Berlin. I’m still a freelancer. And when it comes to festivals, Berlinale’s one of the “big three”. I’d be silly not to cover it again, right? In my adopted home town? This is where I live. Doubts arise.

Can I still do this? Cover a festival? This isn’t what I do now – well not  often, anyway. Do I still love film enough to watch four movies – FOUR! – a day, and surrender my life to it for an entire month?

Moreover, does film still love me?

The answer – like most things as I’m learning – lay in ‘finding community’. Enter three sweet souls: firstly David Mouriquand, “half-French, half-English” he tells me within moments of meeting, which we do by chance on Day Two of the pre-festival press screenings, waiting in the cold outside of the big-arse multiplex where films are being previewed.

Asking “whether the doors are open yet”, I apologise for assuming he speaks English and not German. He tells me he doesn’t speak German “just French and English”. Oh yeah, “and Spanish”. Whereupon I blush with the shame of my Antipodean mono-lingual upbringing.

He writes for English-language Berlin pop-culture mag EXBERLINER, and is steeling himself to blog daily once the Festival begins (read tight turnarounds between snatched snacks and three daily Competition screenings.) Within seconds he offers up his love for Tom Waits and helpful advice on how to navigate this freaking behemoth of a Festival. I sigh audibly in relief and watch the breath from my lungs freeze mid-air. 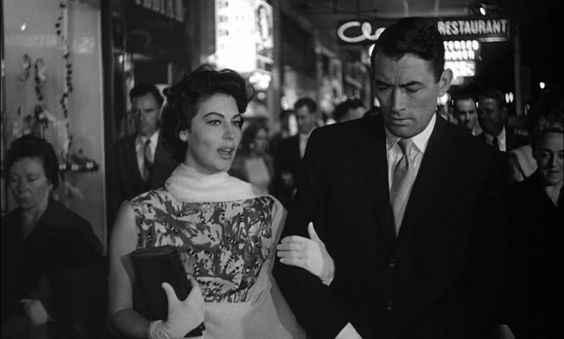 Day Three and David introduces me to Yun-hua Chen. From Taiwan and Berlin-based, she speaks Chinese, German, French and English (possibly even some Greek), writes reviews in all four, and works for the Goethe Institute’s international critic program. She’s a hardcore cinephile. I quiver in admiration.

Day Four, and anticipating a massive dose of home-sickness, I see On The Beach (1959), a movie set in and around the beaches of Melbourne, my home town. The titular “beach” –  Canadian Bay on the Mornington Peninsula – and the suburbs in which many of its dramatic scenes play out, feel so close. This beach was one of the the places my parents swam, socialised and formed the narrative of their early life together, in their 20s. 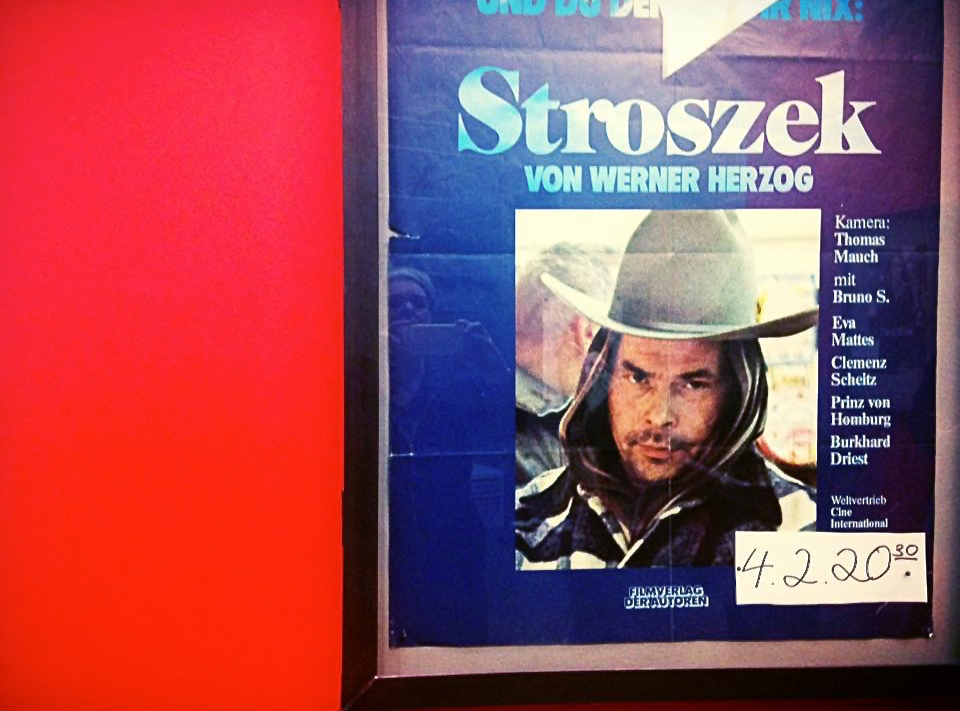 It’s at Arsenal, the cinema for cinephiles. Covered in classic posters (Herzog’s 70s masterpiece Stroszek among them, original creasefolds still visible), I bump into Yun-hua. She  introduces me to Teresa Vena. Teresa’s Swiss, speaks German, English and French (and most-probably Italian.) She writes in all three, and for online magazine Berliner Filmfestivals. I wind up seeing snippets of her reviews on my daily U-Bahn ride to and from the Festival. Playing to the sleep-deprived commuters, they cyclically flash onto the TV screens inside the crowded train carriages.

Teresa spots me after On The Beach: I’m a teary mess. Not just because I’ve just seen my home town (and the beaches where I grew up) rendered empty and soulless by an eerily-imagined atomic apocalypse, but grief has reared its familiar head. The fifth anniversary of my Mum’s passing was only days before. The sadness is still near. The film returns to me a memory of hers: the time she got to shake the hand of Gregory Peck when he was shooting the film in situ. It was the year before she and Dad married and she was working at the city’s iconic department store, Myer. The actor was paraded through the grand building as a token of goodwill towards the city of Melbourne for being so “hospitable” to the production (and it was.) So the story goes, the “ladies of the office”, of whom she was one, lined up to meet the 40-something Hollywood star.

Mum also proudly told me that one of her girlfriends was an extra at Canadian Bay, for the key scene where Ava Gardner and Peck get their romance on. It prompted one of the film’s best lines, uttered by Fred Astaire, who, watching the lovers cavort in the water with binoculars from the shore, declares “It’s like looking at a French movie!”

No matter: I think Teresa was impressed that I could feel so much in a movie. In a world that shuns vulnerability, perhaps that’s the currency cinephiles share, and value: an appreciation for the possibility of being moved to tears in the communal privacy of a darkened cinema.

Deeply inspired by film and energised at the prospect of Berlinale starting – I’d found my people. A Whats App group formed. So did this “gang of film”. With three weeks of previews over, we saddled up and rode into the sunset of the Festival proper: ten days including Competition.

Still from ‘Skins’ by Eduardo Casanova.

A month after meeting, the four of us emerge from the dark. We’ve spent countless hours together, watching countless films – also working, sharing stories, information and snacks, celeb spotting and ‘communing’ at screenings, a few parties, nightly knock-off drinks, and press conferences.

This caravan of critics attracts others. The community ebbs and flows as does the icy weather and occasional sunshine. We laugh stacks, argue kindly and listen deeply.

I’m astonished such a disparate group of people can share so much, so quickly. I’m not used to groups being so functional. Especially not in ‘the workplace’. At odds with today’s competitive click-bait eco-system, these were folk who took themselves lightly but the responsibility of reviewing films seriously. A dying breed.

Between the four of us we see close to five hundred films. Expats all, the  diversity of opinions is as fascinating as it is instructive. Listening to Yun-hua’s perspective on the Taiwanese and Chinese films was illuminating, especially around the nuances involved in the narratives (The Foolish Bird, Mr. Long, Almost Heaven, A Taste of Betel Nut.) Teresa takes no prisoners when it comes to attacking the cliched tropes of French cinema (see Strange Birds, Final Portrait), and recalling the ‘best of British’, David’s merciless take down of conceits, Return To Montauk and The Dinner, was nothing short of hilarious.

The culture of consensus – and nepotism – that so often riddles Australian criticism is mercifully absent. Taste-pusher Skins divides us. So does Golden Bear Winner On Body And Soul, and out-of-competition studio entry Logan, its central ten year-old ‘killing machine’ character racking up double-figures in grisly, bloody kills.

It’s the first time I really feel ‘close’ to European cinema, in all of its complicated, ancient, fraught, sprawling, borderless glory, now somehow less distant, less ‘other’. I kind of get it now. I have Berlin, Berlinale and the Gang Of Film to thank.

The last film I see at Berlinale is a lavish, big-budget popcorn flick, as happily high-camp as it is high-action. On the advice of David (thank you) I watch The Fifth Element (1997) on a massive screen with a massive sound system. It was so pleasurable: a great way to finish what had been, frankly, a marathon that had deprived me of the natural world, and the company of loved ones who I’m sure believed I’d joined witness protection.

Jammed into a packed cinema with five hundred ‘civilians’, intoxicated by its excesses, aesthetics and craziness, together we giggled, marveled and swooned as one giant hive-mind, happily under the influence of 1990s Luc Besson. He was so on fire with that film.

I was moved to tears again, this time feeling a palpable sense of community, as we sat there, strangers, connected by such an intense experience and not wanting the credits to end.

Either that, or Chris Tucker made me cry from laughing so much. He’s sooo funny (and “Lovesexy” in TFE). All hail.

‘Chris Tucker does Prince’. Still from ‘The Fifth Element’.

So. I ask the Gang Of Film if they’d like to commemorate our Berlinale ‘moment’ by making a podcast. So that we can ruminate over the great art we got to appreciate, consider, and write about – Top Tens. Bests. Worsts. Parties. Awards. And argue – especially over whether a) Aki Kaurismaki was in fact drunk when he won the Silver Bear for Best Director, b) His film The Other Side Of Hope was sorely ripped off by not winning the Golden Bear for Best Film, and c) The national drink of Finland is in fact Lakka or Mesimarja.

A quote to end this rant, by the aforementioned Herra Kaurismaki, one of Europe’s greatest filmmakers, chain smokers, lovers of Lakka and and riotous destroyers of vapid award ceremonies: 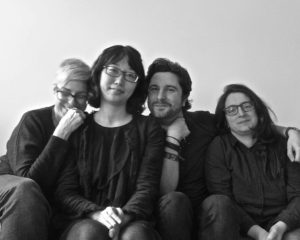