Me and Patti Lee…

I am ashamed to admit it, but I’ve come to Patti Smith LATE. Recently. In the last four years in fact.

Where have you been all my life?

Truth be told, Patricia Lee ‘Patti’ Smith has always been right here, lurking in the periphery of my pop sightlines but never quite square on, in sharp focus, in the same way as say a David Bowie or Talking Heads.

The latter have intensely occupied my soul with many years of study and devotion. Patti’s and my ‘relationship’ is relatively new, only now really starting to gain traction.

Growing up in the 70s I’d heard ‘Because The Night‘ tons of times, usually on the any number of AM radios on in our house – in Mum’s kitchen, Dad’s  garage or my bedroom (there on my beloved transistor.) Another shameful admission: until recently I’d never locked on to the fact that it was Patti singing it and not, um, Pat Benatar.

Did I really think Patti Smith was Pat Benatar?

While it is often regarded as Springsteen’s song (they share a co-writing credit), Patti was the one who’d made it her own and a hit. And what a call to arms he’d sent her way, from studio next door, one artist to another, when he abandoned that unfinished song in ’76 (or so the story goes…)

As my late-20s bled into my early-30s and I’d finally heard Easter, the album ‘Because the Night’ calls home – Horses too – but the limpet effect that usually comes with a transformative, rampant music find had, in this instance, failed to take hold.

‘But why?’ I’ve asked myself many times since realising Patti Smith is one of the most possessing artists I’ve had the pleasure of wending my way to.

I did really like both those albums when I heard them, but it wasn’t love at first sight. Maybe I’d become sidetracked by other artists? (By then it was the ’90s and I’d become waylaid by grunge, hip hop, and film.) 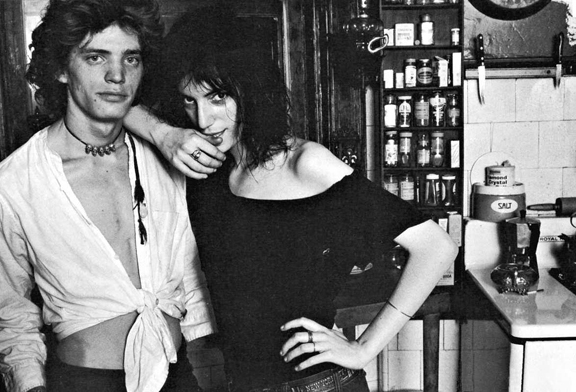 Photo by Judy Linn,  from ‘Patti Smith 1969-1976, Photographs by Judy Linn’. (All credit to the original photographer. Shared from the net with great admiration)

Even so, I am a loyal fan with a pretty big appetite for pop culture heritage; I hoover up details about film and music like no-one’s business. So I’m still not exactly sure I do have a decent excuse for my perturbing Patti-bypass.

In a rural weekender in said ’90s I found myself being hectored by a very demanding, angry, sometime-work colleague who – to be fair – at the time was wrestling with what was possibly undiagnosed bi-polar, definitely narcissism, and certainly other pathological personality issues.

They threw what could only be classified as an abusive tantrum because I resisted the imperative to indulge/engage with their pain and drama (which amounted to savage character assassinations of pretty much everyone we knew.) I had done a lot of smiling and nodding to this explosive acting out for several years, but on this day it had transformed into truly toxic, harmful behaviour. My compassion bone creaked in agony.

Patti bore witness to this ‘straw that broke the camel’s back’ moment. In a petulant rage my ‘colleague’ threw Horses on the record player, DEMANDED I sit and listen or be deemed “NO LONGER WORTHY OF BEING A FRIEND”. (What they really wanted to do was rail further, using Horses as background muzak.)

Once the record was over I left, battle weary, with Patti’s masterpiece the unfortunate collateral damage.

On reflection, yes… That must have been it.

But Dear Patti, ever the optimist you wouldn’t let me go, afterwards appearing on turntables at parties, the FM radio/cassette player in my old car and later again on friends’ CD players, waving at me, bright with hope.

Would I see you this time?

It took me a while, but eventually I waved back. Across fields glistening with music new and old we found each other. I smiled shyly, apologised, and since have jumped into your full embrace.

Our first proper ‘date’ was at the NRW Forum Kultur und Wirtschaft, in Duesseldorf, Germany, January 2010. I stumbled into a stunning retrospective of Robert Mapplethorpe photographs. Patti was on the walls starkly depicted in several large-format prints.

I did know she and Mapplethorpe had been friends and artistic contemporaries in the 1960s/70s Punk Rock Days of New York City. I did know they had eked out an existence together whilst ripening their respective artistic voices – hers in music and poetry, his in fashion and fine art photography – homoerotic fine art photography to be exact. Mapplethorpe’s images were “queerness” manifest, writ large in immaculate photos of same-sex form and fuck: a magnificent “disruption” to the “business-as-usual” of the straight world.

And I did know he’d taken the “controverisal”, sexually ambiguous cover shot of Patti for Horses, posing as one of her beloved dead male poets. They were close…

Looking even more closely at these images, I got an inkling that their partnership must have been something more. “I mean look at her, totally open and happy to reveal herself to him,” I remember thinking.

And he, documenting this exchange inside such powerful, raw, intimate portraits. You could feel the connection between them. They inhabited each other, body and soul. 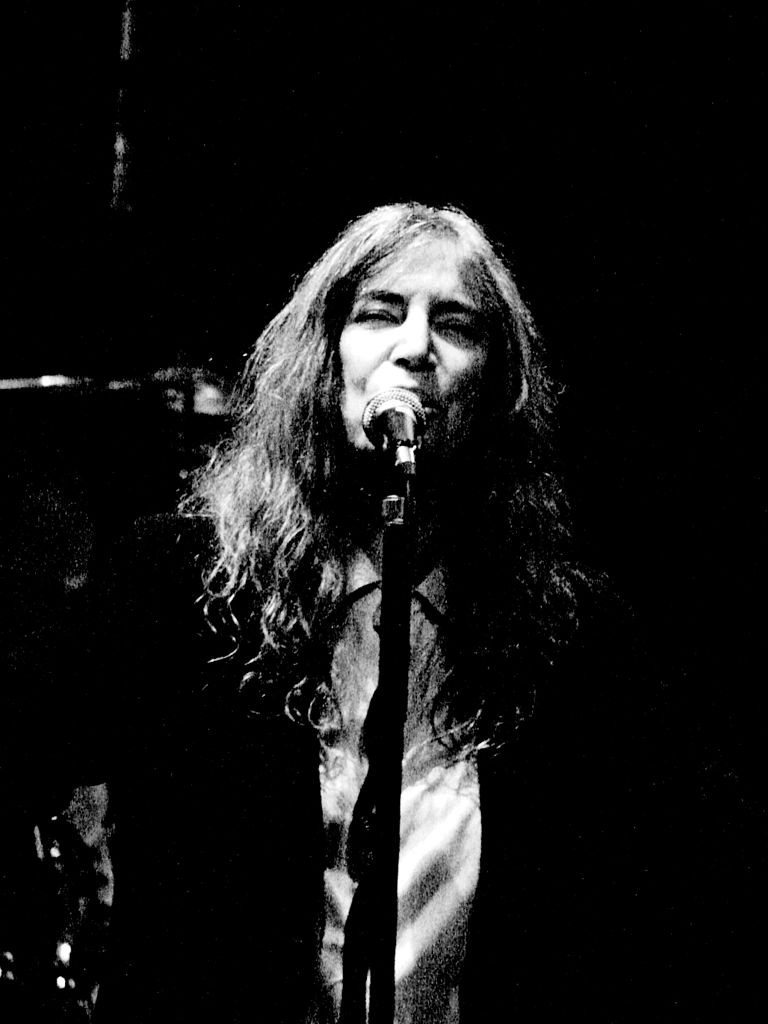 Now it’s late 2012. On another trip to Dusseldorf I discover that my intuition had spoken truly. This time I’d bought Just Kids with me, Patti’s moving memoir of she and Mapplethorpe’s life together, growing up and out into the universe as lovers and artists.

Before they were ‘Patti’ and ‘Mapplethorpe’ they were Patricia and Robert,  ‘just kids’ from the suburbs who’d found each other in the city. Their sense of romance – the great possibilities life offers up – kept them warm at night in their cold, bare-bones walk-up.

I read Just Kids on the many train journeys I took that German winter. As the bleak fields whizzed by my icy window snowbound and blurry, I covered myself in the warmth of their story. I could hear Patti’s distinct, lilting voice softly, gently, musically, singing me their deeply personal, beautiful tale. It’s one of the best books I’ve read – let alone memoirs – filled with yearning, art, spirit, truth, love, tenderness, tragedy and joy. Oh – and rock!

I finished the last page just as we pulled into Nuremberg Hauptbahnhof. While announcements sing-songed over the PA, tears streamed down my face. I sat wishing the book wouldn’t end but knowing we’d reached our mutual, inevitable destination. (The too-obvious “Endbahnhof” metaphor also made me smile.) I’d seen inside her heart. All that was left was ‘now’. What now? It was overwhelming.

What a rare gift to give a stranger – to share your life, thoughts and dreams in this way. Touched by her courage and commitment to this song we call ‘life’, I felt such gratitude to the author, Patti Smith.

Our third date was a no brainer: Banga (released June 2012). I needed to hear Patti’s latest album stat – pretty much as soon as my homeward-bound plane hit the tarmac at Tulla.

Patti says she wrote Track 2 on Banga, ‘April Fool’, “inspired by the life and work” of 19th century Russian writer Nikolai Gogol. I’m convinced it’s also about her love for Mapplethorpe, the early, ebullient days, trying and failing and trying again, their lives stitched together by rags and a raging sense of purpose.

We’ll ride like writers ride
Neither rich nor broke
We’ll race through alleyways
In our tattered cloaks, so
Come – be my April Fool
Come – we’ll break all the rules (lyrics from ‘April Fool’)

We’re going strong now, me and Patti Lee: I watch documentaries and videos of Patti speaking at festivals and flog Banga just enough to not get sick of it. I marvel at how damn sexy she is as she rapidly approaches her seventh decade, brandishing that grey GT stripe of hers and that unwavering, bold sense of ROCK and TRUTH and BEAUTY and REVOLUTION.

Like the great poets she adores Patti Smith too is timeless and infinite. Such a path she has cut though the thorny brambles of time and indifference. Yet she doesn’t see herself as an iconoclast; that’s for others to say. Maybe that’s where her true power lies – in her humility.

She makes my heart sing.

‘I don’t believe people playing rock ‘n’ roll should have crowns. We’re not kings and queens. Anybody can play it.’
– Patti Smith, The Talks

I’m slowly going through the backlog of her music, trying to muster the courage to try Horses again.

It’s not too far away now: I can see Patti Lee waving at me again from across that damp field, closer now, dressed in an oversize suit coat and muddy gumboots. As I squint she sings out reassuringly, “it’ll be okay – make a new music memory! Just try and forgive the old bugger.”